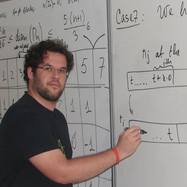 Nino Bašić has completed his diploma studies in 2011 at the Faculty of mathematics and physics, University of Ljubljana, and his PhD in 2016, under the supervision of Prof. Tomaž Pisanski, PhD. His research interests are within the areas of chemical graph theory, topological graph theory, and applications of graph theory in science. He is a member of the committee for the high school and university programming competition organised by ACM Slovenia. In his free time he likes playing basketball and barbecuing. 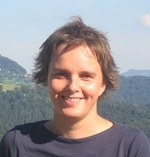 Jan Grošelj has finished his PhD in 2016 at the Faculty of mathematics and physics, University of Ljubljana. His research interests lie in many areas of applicative mathematics. In the faculty in Ljubljana he is a teaching assistant for courses on numerical mathematics. Research-wise, his focus lies in CAGD (computer-assisted geometric design). He is also employed by Abelium as a developer and researcher on projects related to mathematical modelling and optimisation. Within these projects he collaborates in the design of logistical processes for the GoOpti transportation company.

Matjaž Krnc completed his PhD under the supervision of Prof. Riste Škrekovski in 2015 at University of Ljubljana. He was a postdoctoral researcher at University in Salzburg in 2017 and has been actively participating in numerous research visits abroad (Austria, Croatia, Czech Republic, France, Poland, Slovakia, and United Kingdom). His research interests include various classical graph structure problems and related problems in network theory and random graphs.

Rado Pezdir obtained a Masters degree in economics from University of Ljubljana. The fields of his research comprise economic philosophy, health economics, economics of transition, and mathematical economics. He participated in a number of fundamental research projects and consulting projects for the industry. In addition to publications in scientific journals, he also published a book on transition in Slovenia.

Rok Požar graduated in 2009 from the Faculty of Mathematics and Physics (University of Ljubljana), and in 2013 he received his PhD at the Faculty of Computer and Information Science (University of Ljubljana). His research interests are within the areas of algebraic graph theory and computational group theory. He is currently employed as an Assistant Professor at UP FAMNIT. In his spare time he likes to play soccer and is engaged in the production of interior furniture.